Those are hot items. For parts.

September 2016 Gizmodo story : This Old-Ass Commodore 64 Is Still Being Used to Run an Auto Shop in Poland

This C64C used by a small auto repair shop for balancing driveshafts has been working non-stop for over 25 years! And despite surviving a flood it is still going...

The Commodore Amiga was new to GRPS in the early 1980s and it has been working tirelessly ever since. It replaced a computer that was “about the size of a refrigerator.”

A Kentwood High School student programmed it when it was installed in the 1980s. Whenever the district has a problem with it, they go back to the original programmer who still lives in the area.

Parts for the computer are difficult to find.

“It’s a very unique product. It operates on a 1200-bit modem,” said Hopkins. “How it runs, the software that it’s running, is unique to Commodore.”

Hopkins said the system runs on a radio frequency that sends a signal to school buildings, which reply within a matter of seconds with the status of each building.

If the computer stopped working tomorrow, a staff person would have to turn each building’s climate control systems on and off by hand. A new, more current system would cost between $1.5 and 2 million. 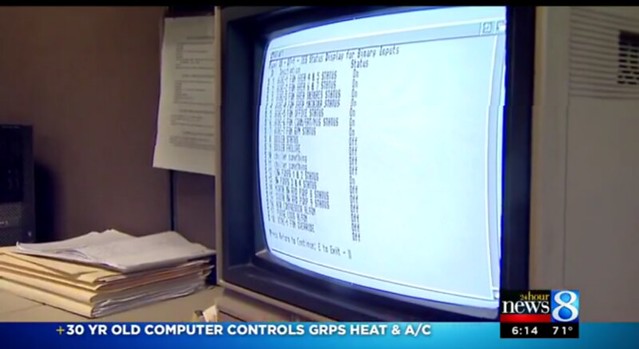