Assembled and baked bread for Easter meal on Sun in central OH.

DD's parents arrived in the afternoon.

We shopped at Levis Commons:
Pottsies
Fiddlestix
and another stor

DD made dinner that included salmon from Rohr's Fish, asparagus, and fingerling potatoes.

I attended a memorial service day at Kitty Todd Nature Preserve in western Lucas County. It's managed by the Nature Conservancy. Over 30 people attended. Great turnout. It honored my friend DH who passed away suddenly and unexpectedly in December 2013. DH volunteered often at KT.

We met at the main KT building, then we carpooled to a KT land area about a mile or two to the south. We cleared brush from a wooded area that was being made into an oak savanna. We "worked" for a couple house. I sawed small trees and shrubs. The weather was comfy.

We ate lunch at the KT building. Then some of us went for a walk on the main path at KT.

We visited the Makers Mart on Adams Street. We shopped for ourselves and others. New local business making spirits for cocktails. I admired the crochet work of Mitten Made.

I bought a leather watch band and a leather jacket for Fields Notes notebooks from http://wrightandrede.com .

We bought spirits from http://www.toledospirits.com/ .

We bought a few other items at the Makers Mart. It's always fun to admire the creativity.

We ate at Ottawa Tavern. Bahn Mi sandwiches. I had a bourbon, Old Forester.

Then we watched a band called "Go Lab at the Ohio Theatre in the Polish Village area of Toledo. While at the Ohio Theatre, we sampled tasty beer, offered by a local nano brewer called S.L.O.B.S. (State Line hOptimistic Brewing Society). 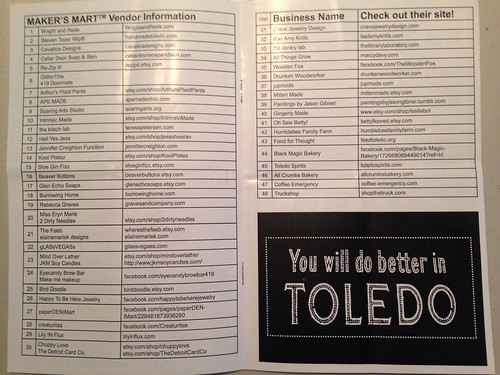 We arrived home after dark.