Maybe this is why Burris won the Toledo City Paper's "Best Of Toledo 2014" award for print journalist. In one column, I can despise what he writes, but his next column can be enjoyable. I enjoyed his Feb 22, 2015 column about the Andersons family.

I think Burris is relatively new to the Toledo area. Today's column includes observations and conclusions that anyone who has lived here for a while already knows.

Man, I miss Mike Collins. He could mangle the language and be pedantic as hell. But he was honorable and had guts. No surprise he was always an outsider.

I learned an important lesson about Toledo politics. The paramount value, and goal, is not that Democrats, Republicans, and independents compete. It is that everyone who belongs to the club gets a cookie at the end of the tree-house meeting.

It's not about party or program. It’s about insiders and outsiders. Not pretty. At a time when the city needed statecraft, it got burlesque.

Mr. Steel’s election was assured by nominal representatives of the other party. But members of the club.

Of course Mr. Steel’s boss, as everyone knows, is a man named Shaun Enright, head of the Northwestern Ohio Building & Construction Trade Council, who often acts openly as a whip on the council chambers floor — sending hand signals to council members and the new president.

I’ve never seen such an open and shameless domination of a political body by a special interest.

... what are we to make of a council — even the Republicans and so-called independents — that hands all the power to one union and one tiny sliver of a financially, morally, and intellectually bankrupt political party?

The icing on the cake Tuesday was Ms. Harper dramatically withdrawing her name. (Larry Sykes tried to re-enter it.) And Mr. Steel announcing he will take a leave as party chairman — after he was elected council president, of course.

It felt like pre-scripted playacting and it was. I didn’t know whether to throw up or go home and take a shower.

The insincerity oozed through the hall. You could cut it with a knife. Cynicism and self-service ruled the day. And the comedy of everyone getting as low as they could.

All in the game. It is a game. If politics does not serve the common good at all, that only leaves self-interest and self-aggrandizement. If it is not competitive it will inevitably become corrupt.

Service and competition were buried under the ooze at City Council Tuesday.

Welcome to the real world of Toledo goobermint. We should have taken the blue pill. 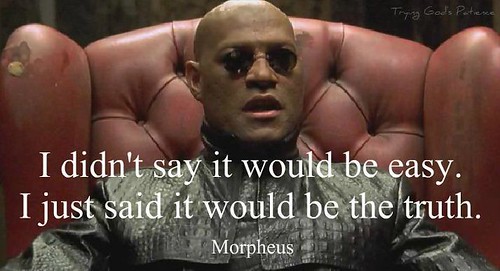 (the quote actually occurred in a different part of the movie)